Carvel is now a CNCF Sandbox project! Read about this exciting next step in our journey here. 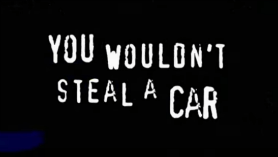 Some of y’all might remember the beginning of every DVD movie showing this warning (read: scare tactic) to try and combat piracy.

These days, however, based on the amount of security breaches, dev tools could use a similar warning, i.e. using an image that hasn’t had its signature verified.

“You wouldn’t insert a USB found on the sidewalk”

Imgpkg is a way to package and distribute multiple images via a single OCI artifact known as a Bundle. Cosign is a way to sign container images.

We at Carvel are always looking for opportunities to integrate with existing OSS solutions. Cosign is one such tool we have integrated with (since imgpkg 0.9.0+).

This integration aims to solve the problem of having various images representing a deployment, and propagating it from dev to production while maintaining integrity and provenance.

It can be summed up in 3 steps:

Alright let me try to explain in a little more detail.

We are going to work with two projects:

Each project will also have its own private/public key used to sign and verify said image.

Private keys are stored as encrypted PEM files. They should be safe to put along side your source code. This allows you to decrypt and then sign (requiring a password stored in a secure manner) as part of your CI/CD system.

Creating a simple single-layer image can be achieved using the imgpkg push command (with the --image flag). There are plenty of other ways to build images too! (using kbld, docker etc). This workflow works with all of them.

Let’s also create the bundle image and reference the useful-server-image we pushed just a second ago. One difference being we provide the push command with the --bundle flag instead of the --image flag.

For this example, I’m keeping it simple and only using one image (useful-server-image). However, imgpkg has been optimized and used in the wild to reference many hundreds of images. Let’s create an imgpkg Bundle and reference every image we plan on using in our deployment.

We now have our two images pushed and signed! Digging a bit deeper however, useful-bundle and useful-server-image actually now have two images each. One being the image pushed using imgpkg and the other containing the signature of said image.

For those of you curious to find the location of the signature image you can use the triangulate subcommand:

Our bundle of images are now ready to be promoted to the test environment.

imgpkg copy (with the --cosign-signatures flag) ensures the bundle image, images referenced within the bundle and the signature images are identical between the source and target repository.

It might be useful to note that an ‘image’ is an abstract concept, similar to a network connection really being a series of packets stitched together. An image is a bunch of json and tar files stitched together. This json known as the OCI’s Image Manifest is encoded and hashed, resulting in a digest that can be signed over using cosign. And as previously stated, because imgpkg guarantees the contents of the OCI’s Image Manifest is identical, cosign signature verification continues to work!

Once the necessary testing has been performed on our useful-bundle, we can annotate (using cosign’s -a flag) the signature image signalling that the e2e tests has succeeded. We then promote the bundle from test to production.

The bundle that now resides in the production repository can be verified (yet again) with additional checks to ensure that e2e tests have also run.

Running that same verification using the original (dev) useful-bundle does not succeed. This is because that image was not annotated with e2e-tests-passed.

To learn more about how to deploy this bundle on kubernetes, check out our docs around pulling a bundle onto disk and using carvel to deploy config to kuberenetes.

Lastly, If you are using kubernetes there is a good article describing how to verify images used in resources (like pods) using Connaisseur.

I’m personally excited about the upcoming features imgpkg has lined up. View our roadmap for the latest info.

Also, imgpkg is only a single building block. Carvel (inspired by the unix philosophy) also offers other composable, modular building blocks giving users full flexibility in how they wish to work, while still preserving extensibility in their workflow.

Join us on Slack and GitHub ¶

We are excited about this new adventure and we want to hear from you and learn with you. Here are several ways you can get involved: